If a party is good, its representatives’ actions must support the Constitution.

Voting scores that measure support for the Constitution are key resources.

These resources are already quite good, can be further improved with simple changes, and can greatly limit our governments.

Boundaries are simple and effective.

Throughout life, people keep learning how to keep good boundaries [1]. When they don’t, there are natural consequences: people’s relationships are draining and are prone to fail.

Such pain is a strong motivator. As a result, people typically keep learning to do better at respecting and asserting boundaries in their personal lives.

In government, boundaries are the key.

In government currently, instead of bad boundaries resulting in natural consequences, bad boundaries are incentivized by our major parties, both of which are controlled by Progressives.

Progressive governance makes we the people the forgotten men.

Our major parties are how we get stuck with elected representatives who defy the Constitution without consequence.

Make Clear Which Action Is Right

All scorers need to grapple with our current Progressive governments’ massive unconstitutionalism—the grabbing of unenumerated powers that are reserved to the states or to the people, the delegating of legislative powers, the legislatures’ grabbing of executive powers, and on and on.

When scoring measures are brought into wide use to influence governance, scorers should as soon as possible shift to requiring greater fidelity to the Constitution.

Getting this feedback loop tight and responsive is a key need.

The best scoring would be actionable. Each desired action would be openly explained by the scorer in advance, before elected representatives take a given action on the job.

It’s great if the scoring is summarized with a measure that’s jumpy, since such quick responsiveness will promote good action. Rapid feedback and correction provides the most-accurate control [7]. The best scoring summary measures will be fast-acting and information-rich.

It’s awful if the scoring is summarized with a measure that’s smooth, since such unresponsiveness enables bad action. The worst scoring summary measures paper over bad action.

But bad Republican incumbents will often have voted as if they’re constitutionalists while they were in the minority and they knew that constitutionalist bills won’t pass, and will have voted as the Progressives they are when they were in the majority and they knew that constitutionalist bills would otherwise have passed. When a score is aggregated across an incumbent’s lifetime, a Republican Progressive’s gaming of his votes during the periods when he was in the minority will make his summary score look very-deceptively good.

Support of Constitution Is Measured Already

For several possibly-constitutionalist scoring measures, key stats are compared in the table. 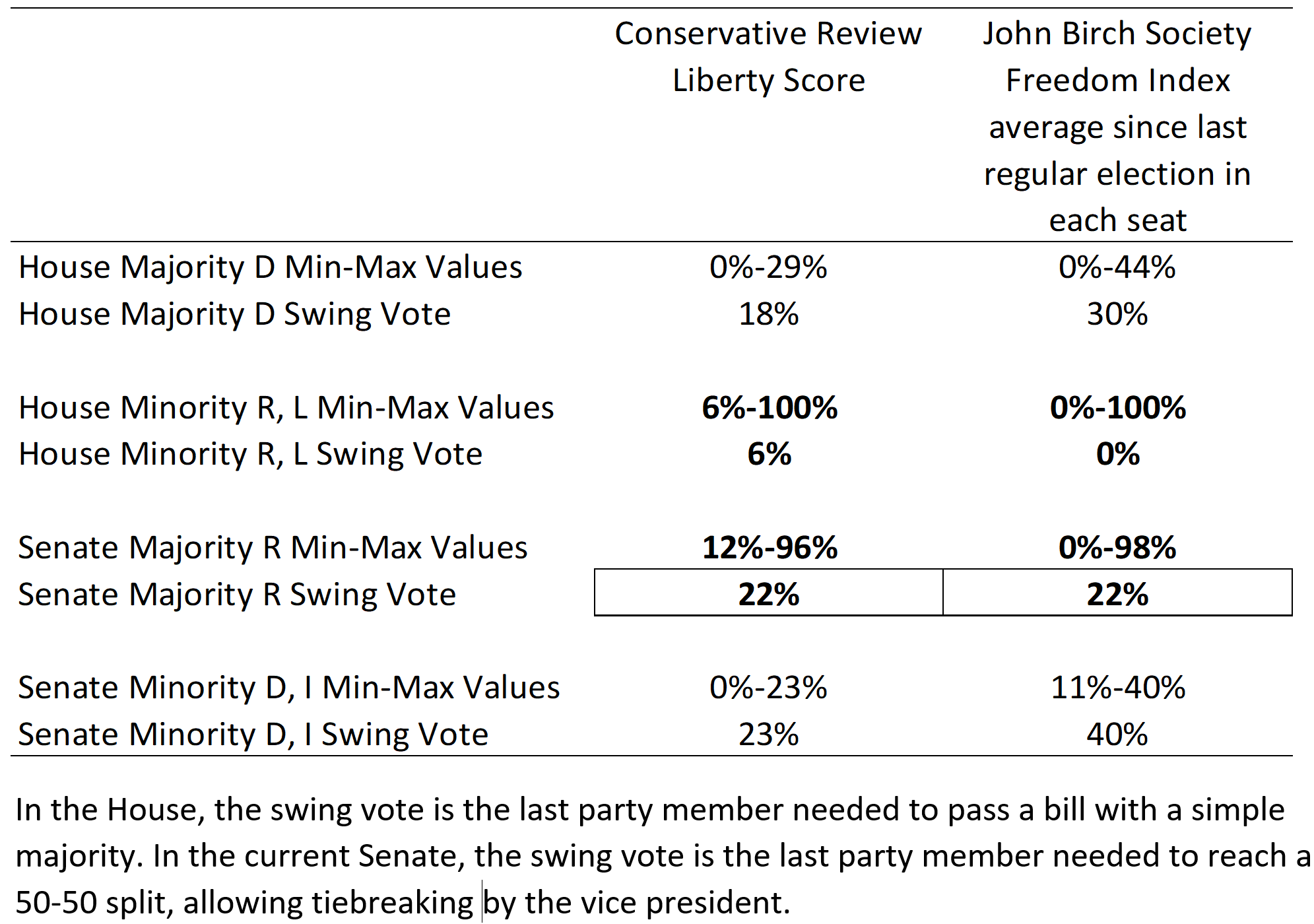 In Congress, Both Parties’ Swing Voters Vote the Same

Each election barely changes these swing votes [10]. Regardless of whether the majority in either house of Congress is Democratic or Republican, the only bills that can pass are Progressive [2].

The current party system needs to be changed. A good party needs to disqualify incumbents who score below 80% using the CR Liberty Score or using a measure that’s comparable or better [2].

Given a Choice, Voters Limit Governments

Once at least one good party offers such a real choice, that party’s candidates will be elected by voters.

In the 2016 election, primary majorities and electoral majorities elected the candidate they believed would take the most-constitutionalist action.

This was especially true before 1894, when there was almost always at least one small-government party. The smaller-government party always became dominant (and then always broke bad [11], because of its poor design [2]).

The Republican Party allows anyone to win primaries and elections. Despite the party’s actively opposing constitutionalists, some constitutionalists make use of the party’s ballot access, run the gauntlet of party opposition in both candidate-selection elections and general elections, and get elected [10]. Sadly, this is the exception.

Overall, the Republican Party is the lynchpin guarding the rear flank of the Progressives, denying voters a real choice [12].

Make votes make a real difference, and governments will be self-limited. Then free people will simply work together to add value, and this will create a far-better future for all people.

James Anthony is the author of The Constitution Needs a Good Party: Good Government Comes from Good Boundaries and rConstitution Papers: Offsetting Powers Secure Our Rights. Mr. Anthony is an experienced chemical engineer with a master’s in mechanical engineering.