Lately, SARS-CoV-2 premised tyranny, 2020 election tyranny, and extreme government spending have brought to the forefront our need to understand how to limit governments, increasing freedom.

Freedom is maximized by chartering republican governments, getting offsetting powers used fully, and paring down governments’ powers to the minimum, so customers control the maximum fraction of spending.

Republican government has at least three attributes: ultimate control by the citizenry, no monarchy, and adherence to law [1], [2]. Each attribute is present in any government that’s limited.

Enumerated powers, though, are not provided in the charters of political parties or in state constitutions [8].

A second path for change is already widely in place in existing charters.

The Constitution is supreme, and by itself is enough to enable rights to be protected immediately. The Constitution’s bedrock rule is that no person shall be deprived of life, liberty, or property without due process of law [13]. The Constitution’s sanctions include the strong mandates that government officers—national and state; legislative, executive, and judicial—must support [14] or protect [15] the Constitution. This requires that each officer independently evaluate each action [16] and only take actions that he himself believes are constitutional.

Lately, SARS-CoV-2 has been the premise for widespread, damaging [17] exercises of absolute power [18], bypassing republican government’s nondelegation of legislative powers. County and city officials are beginning to oppose this tyranny using the power of their oaths or affirmations of office. All government officials have this power, but—naturally—change for the better is coming first in local governments, especially local governments that are pressed hard by citizens [19].

The SARS-CoV-2 premised tyranny has illuminated that change for the better is blocked most strongly by two kinds of organizations: parties, and businesses, schools, and nonprofits that extend government powers or that extend tyranny of their own.

As noted earlier, our parties’ charters don’t limit the parties with enumerated powers or with separated powers. Majorities of both major parties’ elected representatives go on from there to violate the chartered boundaries that are designed to limit our governments.

To have good boundaries requires respecting others’ boundaries and also defending one’s own boundaries.

But the nominal leadership and the elected representatives of both major parties are dominated by Progressives. What defines Progressives is that Progressives don’t use constitutional powers against others in government [9]. Progressives collude to violate the Constitution and to violate every other charter that limits any other government.

Once this fundamental sin is understood, it can be actively opposed, removed, and limited on an ongoing basis going forward.

Between elections, voters can evaluate elected representatives solely according to their use of constitutional powers against others in government. Voters can support those who use their powers, and pressure those who don’t [20].

When the governments involved are local and small, it’s easier to vote them out, pressure them, and make this change, as well, fast and extensive.

The extensive change that’s ultimately needed is to build a good party [9] in which the party organization is of republican form.

Many businesses, schools, and nonprofits, acting either as extensions of governments or on their own, also act crucially to deprive persons of liberty or property; and these organizations face no consequences. SARS-CoV-2-premised tyranny has made such actions more extensive and more visible.

These deprivations can’t be avoided by customers if a seller’s product is different enough from other competing products to be decisively preferred by customers. Also, these deprivations can’t be avoided if all readily-available sellers impose practically the same rules [21]. If, in either case, any of these organizations’ rules also deprive persons of liberty or property, that is illegal.

Once this fundamental sin is understood too, it can be removed too, although this requires the application of more organized power.

It is critical to limit infringements of customers’ rights. Once this is accomplished, then businesses, schools, and nonprofits will have no alternative but to compete freely to provide products under the supervisory control of customers.

Paring Down Governments’ Scopes to the Minimum

Freedom is largest when republican governments supply only what producers can’t quickly supply yet, and customers choose products from freely-competing producers.

Customers, in contrast, can choose exactly what product delivers the most value for them in whatever way they will use it. And customers get to make such choices about every product they use.

Customers, by shopping, are themselves immediately adding value that they will see for as long as they use these products.

Customers also are collectively adding value that we all benefit from constantly [22]. Their shopping decides which producers are adding more value and will get to control more resources, and which producers are adding less value and will have to get by with controlling fewer resources or will have to dissolve and move on to other work where their people will add more value.

For people to gain the most benefits from this system of voluntary cooperation and competition, governments must be limited to do only the tasks that people can get done only if these tasks are controlled by governments.

The limited scopes that, for now, should reside in national governments and state governments are already very small, as listed in the figure. 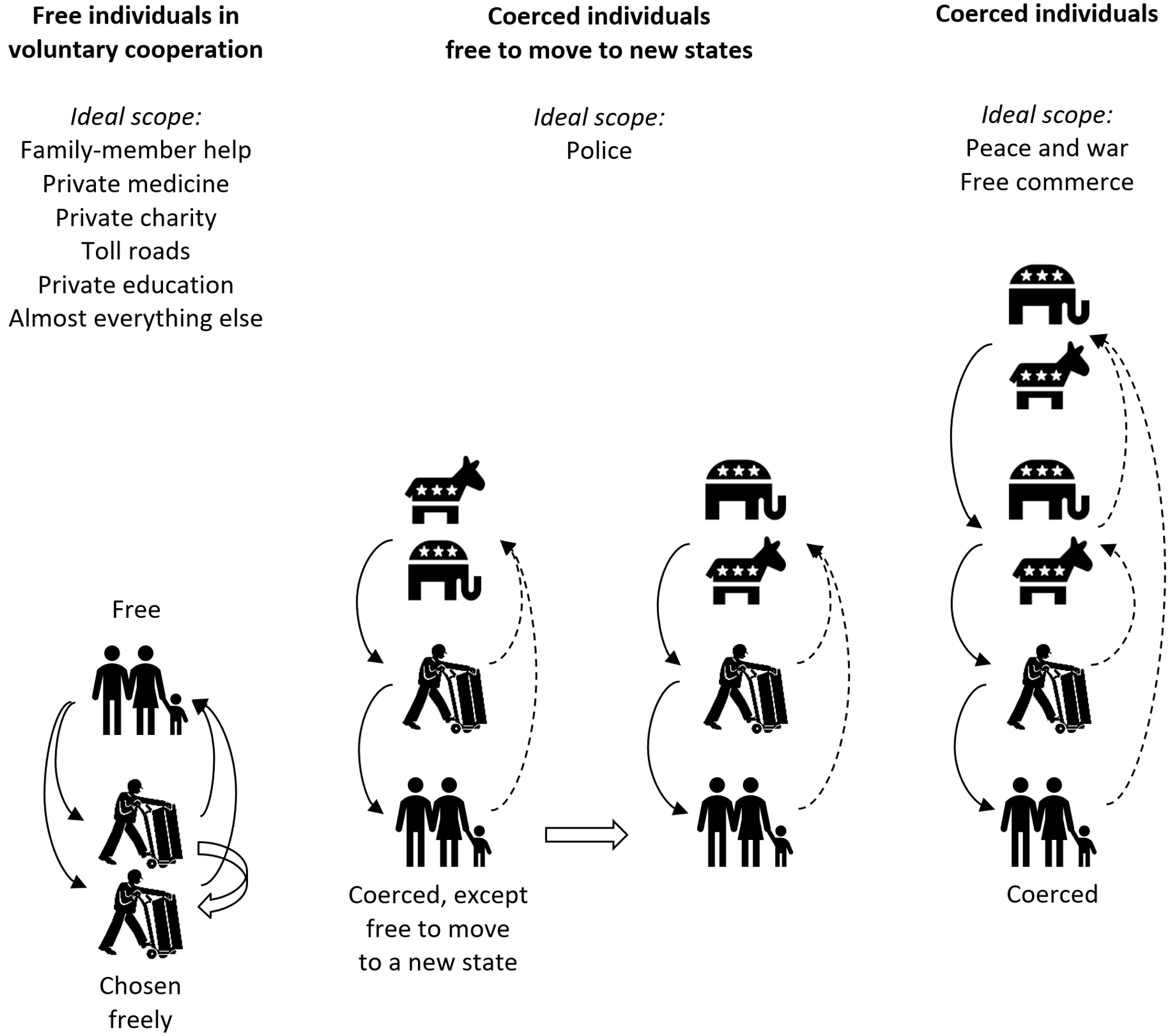 Government people must defend their own boundaries, and ours.

A government’s got to know its limitations [24].

James Anthony is the author of The Constitution Needs a Good Party and rConstitution Papers, and has written in The Federalist, American Thinker, Foundation for Economic Education, and rConstitution.us. He is an experienced chemical engineer with a master’s in mechanical engineering and a strong background in process design and control.