In 1897, a Progressive who studied city governments concluded that if socialism ever comes, it more than likely will come by way of the city [1].

Now, city officials who enable monopolistic public sector unions, and the members of these unions, both are core members of today’s socialist elite [2]. Big cities’ representatives dominate many state governments, and cities’ representatives dominate the national government. As of 2018, the districts that were predominantly either urban, urban-suburban, or inner-ring suburban elected 64% of House Democrats [3], who now are overtly socialist.

Meanwhile, people, in the course of just going about their normal lives, regularly choose to live in specific neighborhoods. These deliberate, careful choices sort people into relatively-homogenous groups.

In any given neighborhood, the people who choose to live there would like their city government to fit their preferences more closely.

Developing a distinct government that matches the preferences of a distinct neighborhood is the established practice in newer parts of the USA. Suburban regions are almost all divided into smaller entities—cities, boroughs, townships, towns, or villages [4].

Urban regions are the behind-the-times exception. Big-city cores are almost all each controlled by centralized big governments.

Small, neighborhood-based city governments would take people’s careful selections of where to live and would put all this existing self-organizing to further use to fix city problems. Neighborhood cities would carve up big city-government problems into manageable, bite-sized pieces. This decentralization would enable people to experiment, learn what works best, and adopt best practices as soon as each neighborhood city’s people are ready.

Give City Governments an Inch and They’ll Take a Mile

At the time the Constitution was ratified, the people reserved to themselves the powers over religion, education, and social services. State governments had power over militias, local governments, property not in interstate commerce, family affairs, criminals, intrastate civil disputes, and businesses [5]. City governments were delegated most power over criminal law enforcement and some power over businesses.

The resulting local-government spending nowadays is summarized in the table.

Table. Local-government spending by category in 2018 [10],
and potential spending in minimalist neighborhood cities 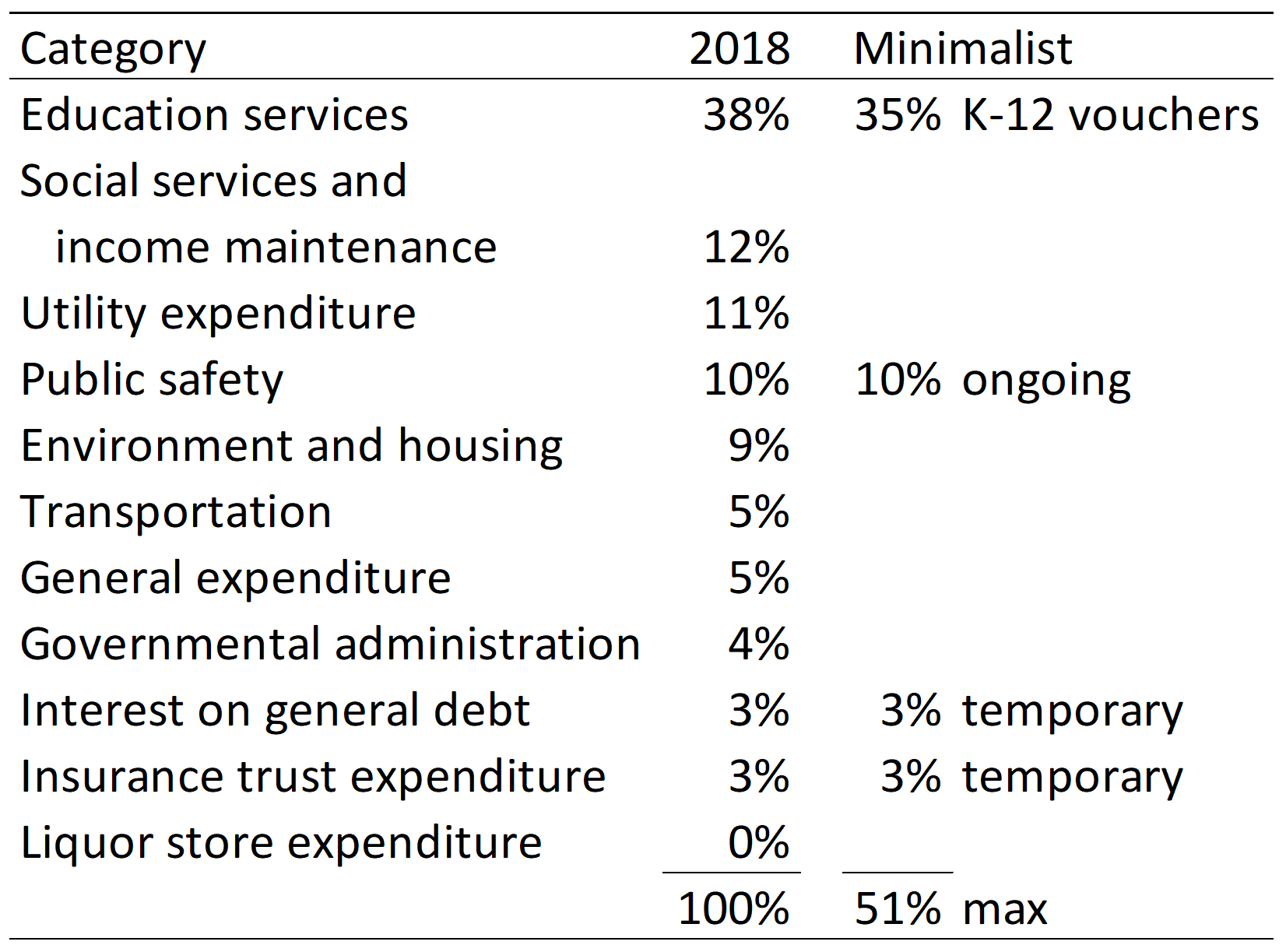 K-12 school spending could be transferred to parents’ control through vouchers that have no strings attached.

Change that’s fast and complete is always best [11], both to solidify better political coalitions and to deliver the most improvement for the longest.

Here, if change is fast, then at first the nearby nongovernment schools would temporarily need to take extra steps to satisfy the extra demand, so at first their marginal costs would be higher than usual.

On top of that, given vouchers with no strings attached, parents would have maximum freedom to vote with their feet, and this would provide further pressure. Under all the competitive pressures, choices and quality would also steadily improve [13].

Public-safety spending—the table’s only substantial category that the Constitution’s ratifiers agreed was appropriate for local governments—initially could be kept as-is.

Over time, especially as nearby neighborhood cities were organized and made the local market larger, neighborhoods could sooner or later purchase these services from competitive security-business startups, and quality and pricing would improve.

By focusing attention on this core function and on the results, a given neighborhood-city’s people might decide either to buy more public-safety services or to buy fewer, whichever improves these people’s quality of life.

General debt and insurance-trust pension spending would be immediately stopped from growing larger, could be fully funded if needed, and could be retired if desired.

The remaining, non-minimalist spending would be left to individuals to choose for themselves.

Social services, income maintenance, and housing are naturals to be provided by individuals working directly through charities, as was done on a larger scale in the past, improving quality and pricing [14].

Utilities, environmental, transportation, and liquor stores are naturals to be bought by individuals [15] directly from businesspeople, as is done in many areas already, improving quality and pricing.

General expenditures and government administration would be negligibly small once overall operations were minimalist.

Most of the skill and effort required to make neighborhood cities work well are already amply provided by people anyway in the natural way—by individually self-organizing—when people choose to live in a given neighborhood. To use these careful choices to best advantage only requires two smaller steps further:

James Anthony is the author of The Constitution Needs a Good Party and rConstitution Papers, publishes rConstitution.us, and has written articles in The Federalist, American Thinker, and Foundation for Economic Education. He’s an experienced chemical engineer with a master’s in mechanical engineering.