Productive Property Adds Value for Everyone

Assets that are productive underpin all added value, innovation, and wealth.

The battle for sound money is in the news often, with Fed candidates mentioning returning to a gold standard, with the Chinese and Russian governments buying gold, and with cryptocurrencies being seen as potentially bypassing government restrictions [1].

But even sound-money advocates are missing the larger picture. Gold and cryptos fall far short of being the best store of value in terms of productivity, total value, and irreplaceability.

Gold and cryptos just sit in vaults or on servers doing nothing. Investments in company shares, on the other hand, add to the voluntary economy’s capital and get put to work adding more value. As a result, as financial advisors know very well, these equities provide long-term investment returns that are far superior [2].

And since investments in company shares are put to work, equity-based money would have two side benefits that gold and cryptos could never match.

Unlike gold and cryptos, company shares have an existing value that’s at least an order of magnitude more massive—as we’ll see shortly, their existing value is comparable to the total value of the money that’s currently outstanding. Equity-based money would therefore be a store of value that’s intrinsically far larger and more stable.

These key broad considerations about what’s the best future money are part of an even-broader picture of what are the best assets to hold.

As a result, much good can be done by making government people more-fully aware of the opportunities they have to let people add more value.

An unappreciated, key way that government people can help people cooperate with one another freely is to simply let people change which assets they hold.

The assets held by the world’s people can be categorized as productive (value adding), constant (value maintaining), or consumptive (consumption enabling), as shown in the accompanying table. 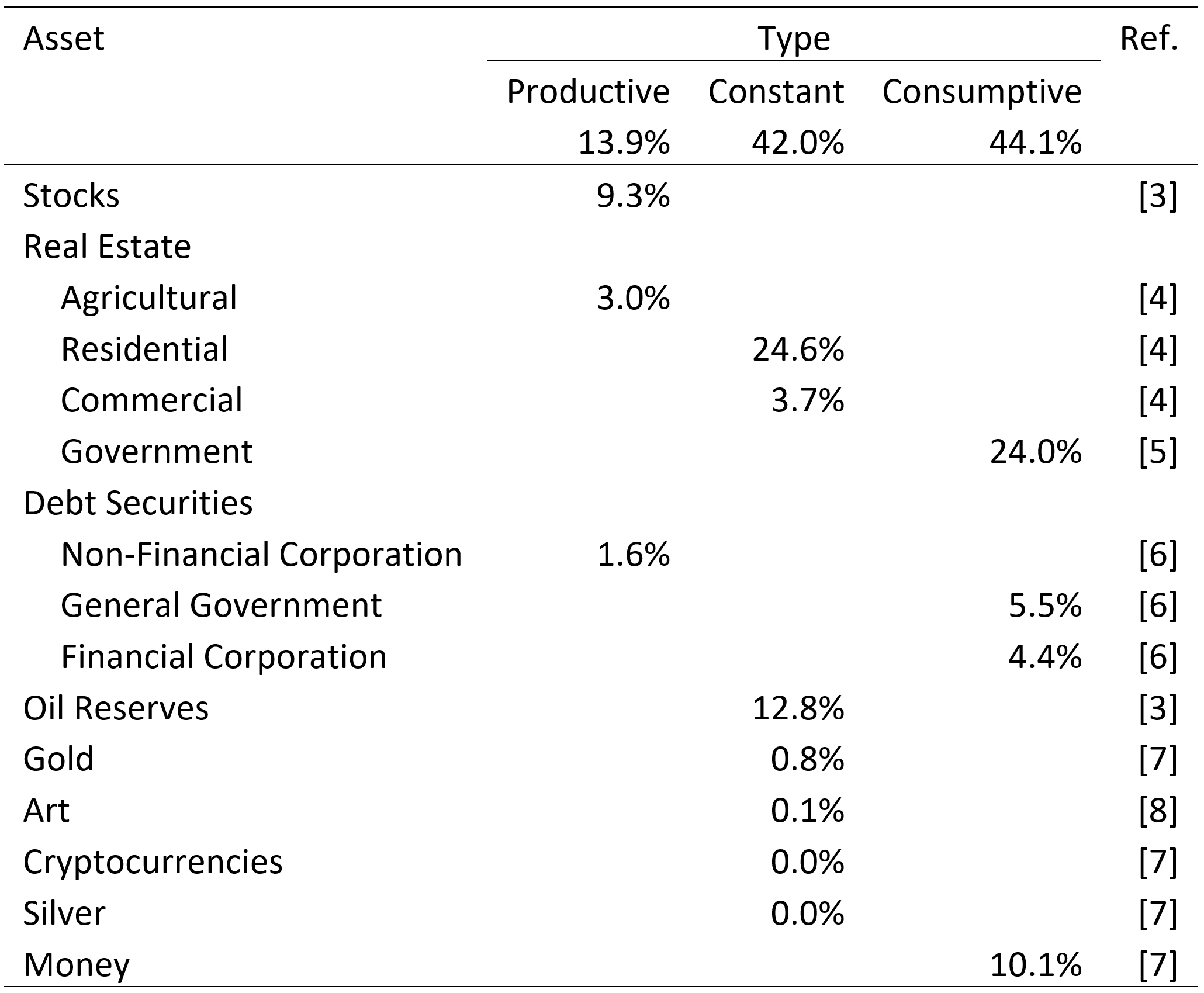 Productive Assets Add Value for Everyone

Company shares, farm land, and company bonds are assets that are productive.

Productive assets are force multipliers. They enable farmers to use machinery, workers to run plants, and designers to improve processes.

Producers have diverse opportunities to increase productivity and optimize quality, features, and delivery.

Customers, and the producers they control, add value for everyone:

Other constant assets are oil reserves, gold, works of art, cryptocurrencies, and silver.

Constant assets can gain or lose value as a result of external factors. Real estate gets artificially scarcer when crony owners collude with government people to limit other owners’ freedom to improve land. Great cities’ real estate, and great works of art, attract more wealth when more wealth is produced. Oil reserves are more valuable when government people make supply riskier, but are less valuable when new technologies like fracking increase total reserves. Constant assets that are smaller in total value are affected more by speculation.

Consumptive Assets Destroy Value for Everyone

In these city hubs and this beautiful coastland, businesspeople would compete to best help people work together and live together, providing greater value to everyone.

By blocking businesspeople from providing workspaces and living spaces in prime locations, government people actively destroy great value, the same as if they constantly reserved plane seats or hotel rooms, never showed up, and never paid a dime. Substantial value that could have been produced gets destroyed and gone forever, year after year. Government real estate is consumptive on a massive scale.

Government debt securities are denominated using government money whose purchasing-power value is partly consumed by government people’s inflation of the quantity of money. Before long, though, the remaining purchasing power also gets consumed.

Government debt securities also fund undeclared wars and a supersized military. Both are unconstitutional. Here too, some property is unconstitutionally seized from future voters and is consumed.

The better way is freedom.

Productive assets create options for businesspeople to add value for everyone and to innovate. When savings are shifted from consumptive to productive assets, freedom greatly increases.

One shift in the right direction is to sell prime government real estate and relocate these few government people and airplane passengers to locations that are economical. This will greatly shrink the ongoing destruction of these scarce resources that have alternative uses. This will greatly enhance network effects in cities and regions, will appropriately disempower government people, and will shift up to 24% of world assets from consumptive to constant.

A second shift in the right direction is to freely allow alternative moneys.

Gold and silver are the only moneys the USA government people constitutionally have power to issue. Gold’s and silver’s full legality as money should be explicitly confirmed by repealing unconstitutional statutes that impede their use as money and that protect inferior paper money. Spread worldwide, this would significantly limit government people’s coercive power to destructively spend by inflating government money. In the process, this would shift 10% of world assets from consumptive to constant.

Stocks, though, are the ultimate private money. Stocks are ownership of the world’s publicly-traded companies, including all of these companies’ products, equipment, land, employment contracts, processes, and relationships. The enabling technologies needed for stock-based money all exist now. Stock-based money will instead shift 10% of world assets all the way from consumptive to productive.

A third shift is to eliminate government and financial-corporation debt securities. Freed up, the additional 10% of world assets that’s currently held in these debt securities would also shift from consumptive to productive.

The exponential growth from this dramatically-larger base level of investment would far outpace anything we’ve seen before.

Customers and businesspeople were largely freed of government people’s coercion in the American Colonies and in the United States of America in the 1800s. Total taxes as a percentage of GDP in the American Colonies were just 1-2%, and total local, state, and national government revenues as a percentage of GNP in the USA through 1913 were just 4-8% [11]. This transformed small groups of survivors into the greatest engine for human well-being that has ever existed.

When a good constitutional structure and a good party succeed in limiting government people’s size and coercive force, customers and businesspeople will take over and boost economic well-being way better than government people can ever do by political processes.

With these three simple shifts, we can produce three giant leaps that ratchet up freedom.

James Anthony is the author of The Constitution Needs a Good Party and rConstitution Papers, publishes rConstitution.us, and has written articles in The Federalist, American Thinker, and Foundation for Economic Education. He is an experienced chemical engineer with a master’s in mechanical engineering.