Economic Growth Is a Natural Effect of Christianity 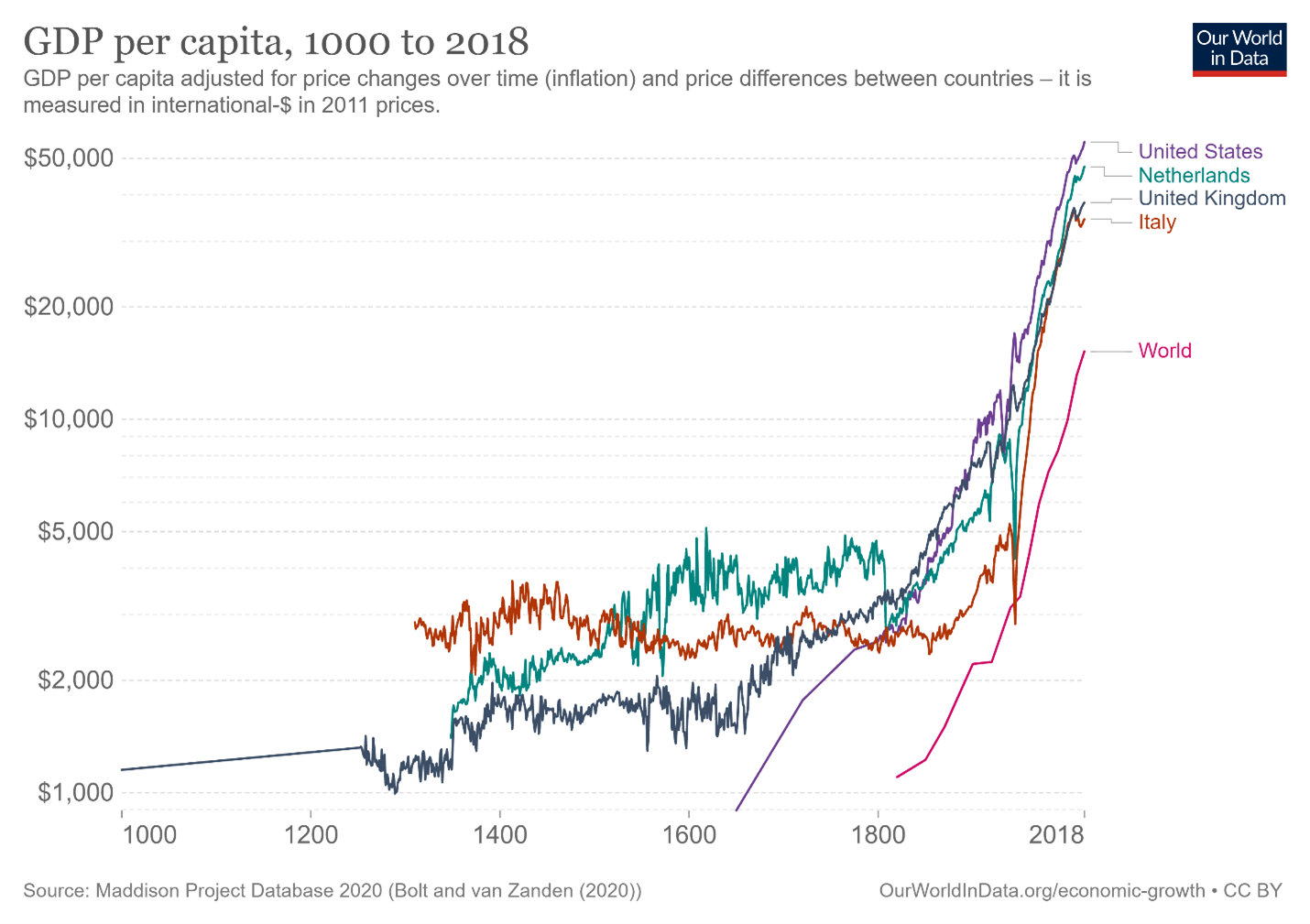 After millennia of people earning barely enough to live on, why did people suddenly start earning 20 to 30 times more?

Economist-theologian Roger McKinney explains that people developed their skills and tools, because they got to keep what they earned and to spend or reinvest as they chose, because they had secure property rights.

Property rights had been unsecure in traditional societies everywhere because of envy. People would compare themselves to the others most like themselves and would punish those who earned more.

Within a family, tribe, city, or nation, the largest group would be those who were the least privileged. A smaller group would be the future heirs, nobles, or other elites. Maintaining the hierarchy would be a patriarch, king, or dictator.

If anyone would innovate and earn more than the others in his group, those others or higher elites would take him down.

In the Biblical book of Judges, God had given the Jewish people a small, complete set of religious, moral, and civil laws, and the only government was judges. Judges decided civil cases and when needed, led the people in wars for self-defense.

All people, including the judges, were equal under God. Property became secure, so people prospered.

Then people would turn from God, and this would bring on natural consequences including judgments through war. Ultimately, people rebelled against God by demanding a king, God gave them a king, and as a natural consequence this era ended.

Much later the Dutch Republic was formed. Its seven provinces had a weak noble class, reformed churches that encouraged individual faith, and technology to print Bibles accessible to all. Learning from Spain’s pioneering University of Salamanca economist-theologians, Dutch people respected businesspeople, including Jews.

People learned and refined technologies, developed shared ownership of business ventures, and quickly dominated international trade. The Dutch Republic became financially stronger at defending itself than Spain was financially able to attack it. Eventually the envious government people of much-more-populous England and France used wars and tariffs to wear down the Dutch Republic’s dominance.

In self-defense, the Dutch Republic’s government people preemptively invaded and occupied England. This inculcated Dutch ways into the receptive English, who christened this period their own Glorious Revolution.

Later, the Pilgrims in Massachusetts started out socialist and soon became hungry and desperate. They reversed to imitate the Dutch, telling each family they would get nothing to eat but what they raised for themselves, and the resulting abundance surprised them. Individual faith kept spreading, property was secure, and a century later these were hallmarks of America.

This book could be improved here and there, as described below.

Feasible paths in building property rights could be illustrated with more mentions of how and when power successfully opposed power, like in the instances in The Doctrine of the Lesser Magistrates [3].

Finally, the line editing is not on a par with the thinking.

For everyone interested in the “why” of history, God Is a Capitalist offers deep understanding not found elsewhere. Strongly recommended!

James Anthony is the author of The Constitution Needs a Good Party and rConstitution Papers. He is an experienced chemical engineer with a master’s in mechanical engineering.