COVID Spiking of New York Nursing Homes Is a Feature, Not a Bug, of Progressivism

This is how Progressive government works.

Nursing-home operators act under constant threat of being put out of business by health departments.

Legislators start by pawning off any semblance of lawmaking to committees. Committee members soon punt entirely on writing genuine laws consisting of rules and penalties [2]. Instead, committee members and legislators act chiefly as super-executives. Their so-called laws create departments and agencies, write mission statements, and executively direct departments and agencies to write so-called regulations that are really laws, consisting of rules and penalties. Media praise legislators for taking decisive actions on problems.

Department and agency administrators gain their jobs through all this. Administrators write some regulations that are really laws, containing rules and penalties. Administrators write even more instruments that give executive direction using various degrees of softer-sounding control, but control nonetheless. Guidance, recommendations, letters, advice—even simply leading questions are readily used to push people in business to either take some action they’re not already taking or risk punishment. Administrators hold press conferences. Media praise administrators for taking decisive actions on problems.

Bending under the weight of all these meddlers, nursing-home operators take note of all this politics-driven pressure and understandably take actions to minimize what they perceive as their combined risk of losses from government punishments and from natural consequences. Natural consequences, though, lose some of their perceived natural riskiness when government legislators, executives, and administrators, and government-friendly media, all seem to mandate a single party-line course of action.

When all publicized actions are the same, the whole herd of actors feels safe.

The nursing-home residents affected by those actions aren’t safe, but that’s basically irrelevant. The people who are affected have just two functions: they are used as excuses to take publicized actions, and they are used as props to attack any actors who separate from the herd.

People take action independently. They have the benefit of far-more collaboration with people who have helpful knowledge and who have skin in the game. Everyone’s best interests are determined by the best interests of the nursing-home residents who are affected.

Nursing-home residents, family, and operators each have close knowledge of their own people and facilities. They have immediate access to customized health advice. They are directly responsible for and accountable for their actions.

Under a republican form of government [3], legislators almost-certainly should be prevented from interfering with these well-informed, rapid, free actions. They should not have delegated to them the enumerated power to interfere.

If legislators are delegated the enumerated power to interfere, then they still are required not take executive actions, and to not delegate legislative power, but to only pass bills consisting of rules and penalties. This action is independent of the private actions of the nursing-home, family, and operators. Since it reflects far-less knowledge, if it’s done wisely it will be far-less invasive. If committee actions are foregone, and if modern travel and communications are taken advantage of, then considerations can rapidly be weighed in public session, tradeoffs can rapidly be aired and considered, and rules and penalties can rapidly be passed in the event that any one-size-fits-all coerced actions seem possibly helpful alongside the extensive private actions already underway.

Executives then can simply execute the resulting rules, allocating government people and time as needed to give constitutional due process to any people suspected of violating the rules.

Constitutional society provides multiple independent layers of protection, like those used in industry as shown in the figure, that improve safety. Progressive government destroys the independence of these protections and degrades safety. 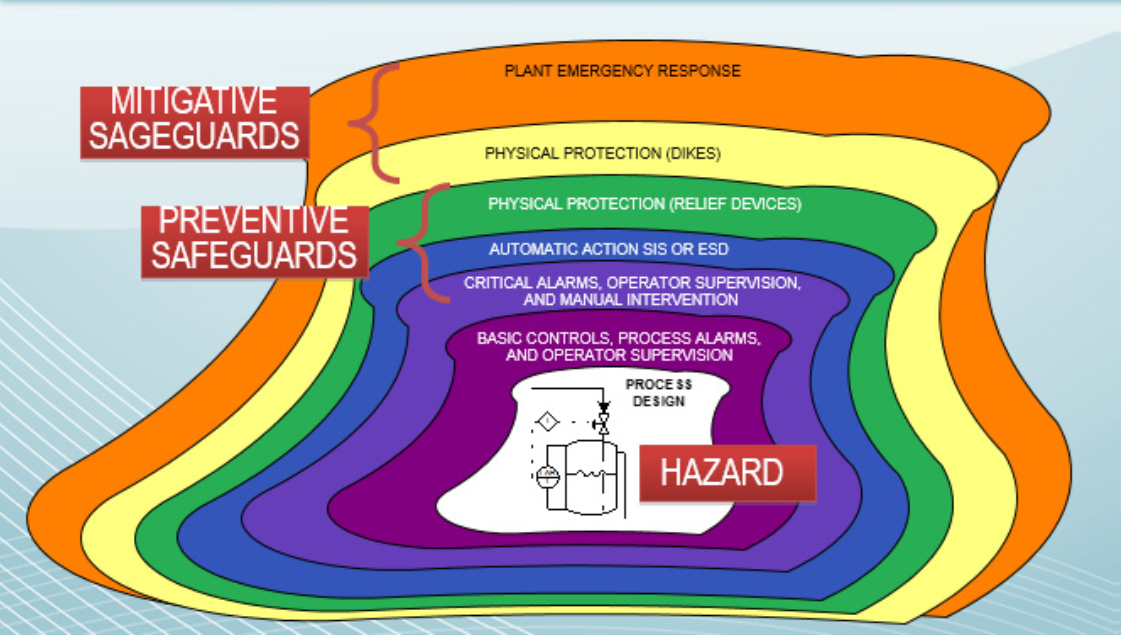 Figure. In Layer of Protection Analysis, a process is protected from consequential losses if at least one independent protection layer works (figure from Ronald J. Willey [5]).

These lives ultimately were taken by a system: Progressivism.

James Anthony is the author of The Constitution Needs a Good Party and rConstitution Papers, is the publisher of rConstitution.us, and has written in The Federalist, American Thinker, and Foundation for Economic Education. Mr. Anthony is a chemical engineer with a master’s in mechanical engineering.